Watch Out for the Invasive Brown Marmorated Stink Bug, a Serious Invasive Pest of Field Crops, Fruits, and Vegetables. 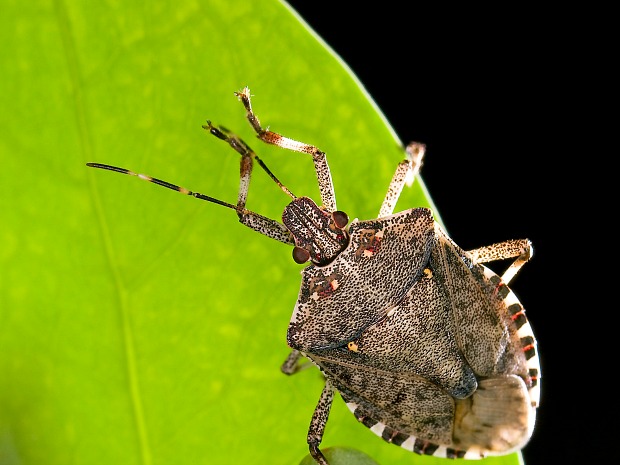 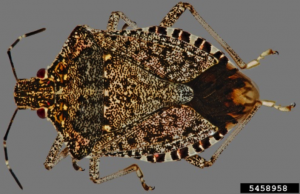 The invasive Brown Marmorated Stink Bug (BMSB), Halyomorpha halys, is a serious pest of agronomic crops, fruits, vegetables, and ornamentals. It is currently distributed in 43 US states and 4 Canadian provinces and it poses severe agricultural problems in 9 states (largely in the Mid-Atlantic) and nuisance problems in 21 others.

BMSB has been reported to be in Missouri since 2013. While BMSB does not seem to have reached damaging populations yet, numbers have been increasing year by year as a result of breeding populations reported in Ferguson / St. Louis area in 2015, and the continued dissemination by hitchhiking on vehicles. Therefore, producers of susceptible crops are encouraged to monitor for this invasive pest, especially if you live in St. Louis, Springfield, and Kansas City areas.

In agronomic crops, damage caused by BMSB is not usually evident immediately upon visual inspection. For instance, in corn the stink bugs feed through the husk, piercing kernels and sucking out the juice resulting in shriveled kernels. BMSB tends to appear in field corn once the ear has developed and bugs can feed upon developing kernels, and occasionally even tassel tissue. BMSB feeding in soybeans is similar to corn, where the bugs pierce the pods and suck juices out of the seeds, leaving behind flattened pods. One visual symptom of BMSB feeding in soybeans is referred to as the “stay green” effect, where injured soybean plants stay green later into the season, while other plants in the field senesce as usual. Additionally, BMSB infestations in field crops are usually characterized by an “edge effect”, where stink bugs infest plants mostly in the first 30 to 40 feet from the edge of a field. Because BMSB appear to spend a lot of time in wooded areas or hedgerows and then move out into crop fields, then it is recommended to first scout for populations in corn /soybean fields along margins with woods.

In fruits and vegetables, small necrotic spots on fruit and leaf surfaces often result from feeding damage by BMSB, and it may be compounded by secondary infections and scarring as the fruit matures. In apple, fruit often exhibit pitting and discoloration symptoms and peaches frequently display a characteristic distortion referred to as “catfacing”. Below is a chart that shows the specialty crops that are at greatest risk to BMSB damage. 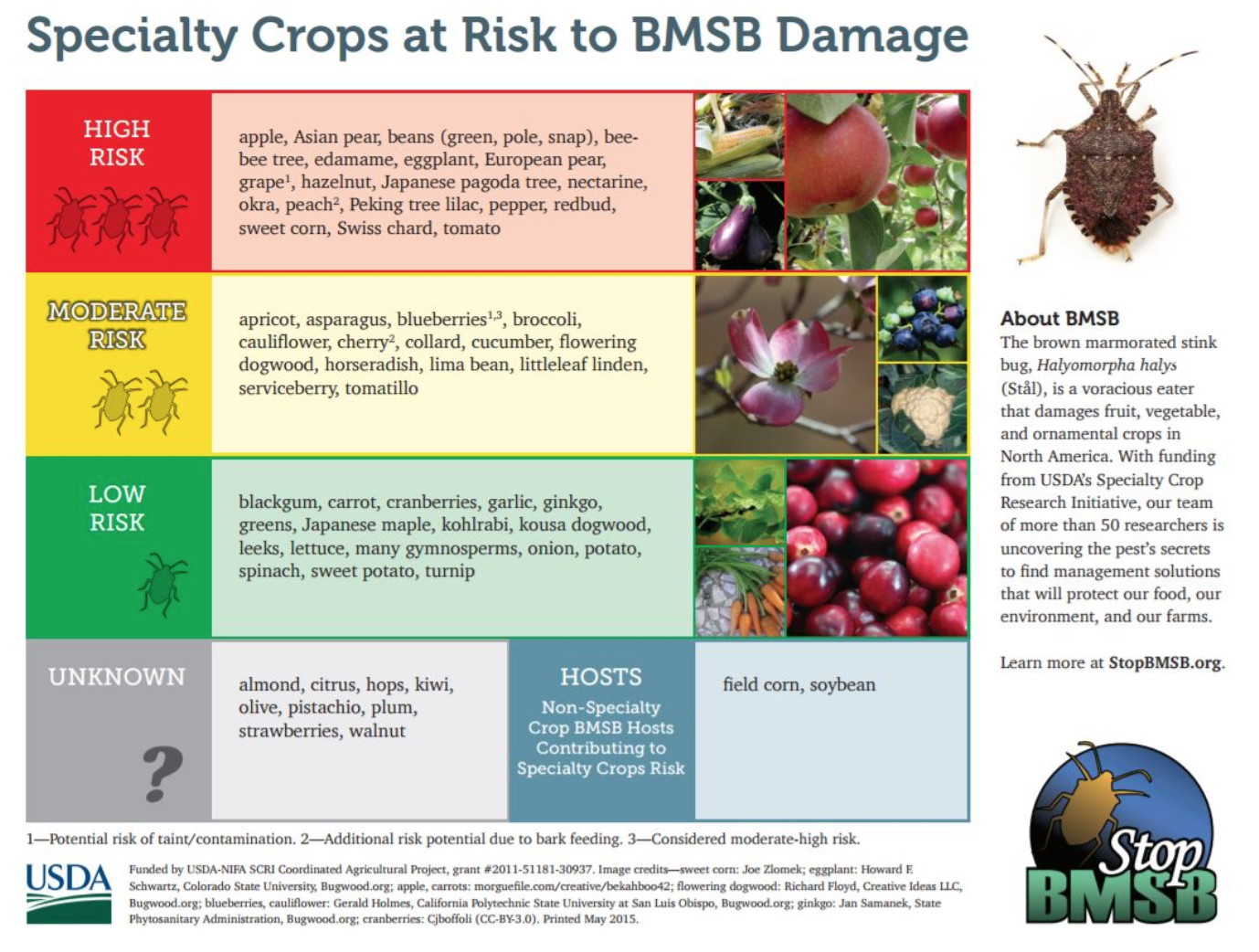 IPM (organic and non-organic) recommendations for BMSB continue to be developed by researchers across the country. Recommendations on economic thresholds, monitoring, and organic control options are discussed below.

I. ECONOMIC THRESHOLDS.
An economic threshold is basically the density of the pest triggering a control method. If left untreated, economic losses due to pest damage are likely to occur. This applies to all farming systems.
In soybean, the economic threshold when scouting with a sweep net is 2.5 stink bugs per 15 sweeps in narrow-row beans or 3.5 stink bugs per 15 sweeps in 30” beans. If a visual search is used, then the economic threshold is one BMSB (nymph or adult) per foot of row for beans of any row width. Because the R4 growth stage is most susceptible to BMSB damage, then populations that are high during later growth stages is not expected to result in economic losses. When sampling, keep in mind that BMSB numbers are highest at dusk and dawn, and reinvasion is possible after a pesticide treatment. To date, no economic thresholds have been developed for fruits and vegetables.

II. MONITORING
Commercially available traps and pheromone lures for BMSB monitoring provide valuable information on the presence of this invasive pest in a given area. 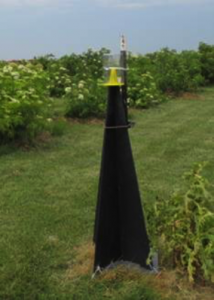 Black pyramid traps. Stink bugs, including BMSB, are visually attracted to tree silhouettes. The trap recommended for monitoring is a black pyramidal trap, which represents trunk mimic, coupled with a capturing device. Researchers are trying to assess whether yellow sticky cards can be used for monitoring purposes.

Pheromone lures: Various companies are now marketing the male-produced aggregation pheromone of BMSB. The pheromone lure that is being used in Missouri is called “Stink Bug Xtra Combo – Broad Spectrum 5-7 week lure” (From AgBio, Inc. http://www.agbio-inc.com). It has been reported to attract multiple stink bug species such as Brown, BMSB, Conchuela, Consperse, Dusky, Green (Acrosternum), Harlequin, and Red Shouldered stink bugs. Therefore, efforts need to me made to correctly distinguish BMSB from other similarly-looking stink bugs.

When should I start monitoring for BMSB? Learning about the life cycle of insect pests is important to design effective IPM tools and strategies, including timing of monitoring. BMSB spend the winter as adults. After emerging from overwintering sites in May and June, BMSB adults begin mating and laying eggs on various host plants. Monitoring for BMSB can start in late-May, and needs to continue until early- or mid-October.

III. OMRI-LISTED MATERIALS THAT CAN BE USED FOR BMSB CONTROL
In organic systems, there are very few effective control options for BMSB. At this moment, the most effective OMRI-listed insecticide is AZERA™, which combines the active ingredients of pyganic (pyrethrins) and neem (azadirachtin). Recent research shows that Surround™ (kaolin clay) can be added to the tank mix to increase the effectiveness of the sprays. If BMSB is detected in damaging numbers, then it is important to target the nymph stage, as nymphs are more sensitive to insecticides than adults. In soybeans BMSB accumulates on field edges. Spraying only the periphery can reduce pesticide use by 85%, while retaining effectiveness.

ALWAYS follow label instructions and safety procedures, and check to make sure the material you are using is registered for use in your crop and it has been approved by your certifier. Mention of trade names or commercial products does not constitute endorsement or recommendation for use.

IV. CULTURAL CONTROLS
The goal of cultural controls is to make the crop environment less suitable for insect pests or to manipulate the environment in such a way that insects are less likely to arrive on the cash crop. Most of the time, cultural control is used as a preventative measure. Research is being conducted in this area and no promising tactics have been identified, except for trap cropping.

Trap cropping is a behaviorally-based strategy involving planting very attractive plants next to a higher value crop so as to congregate the pest in trap crops where they can be easily attacked by natural enemies and/or killed by insecticides. Recent research with BMSB has shown that a trap crop mixture composed of sorghum and sunflower may be an effective management tool for BMSB. To access a webinar on organic management options for BMSB including trap cropping click here. 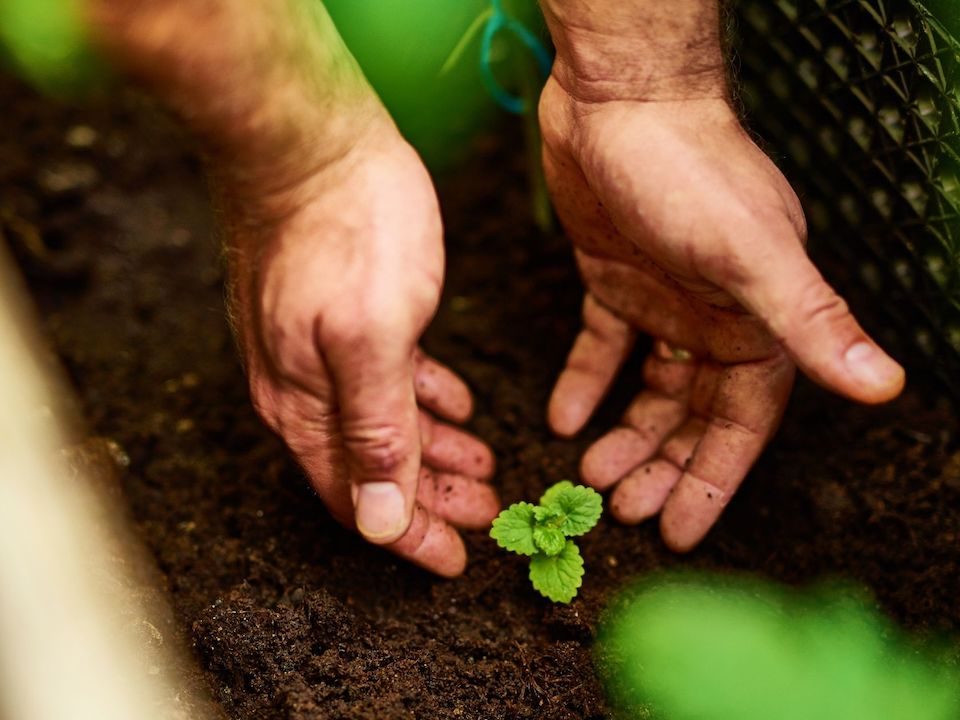 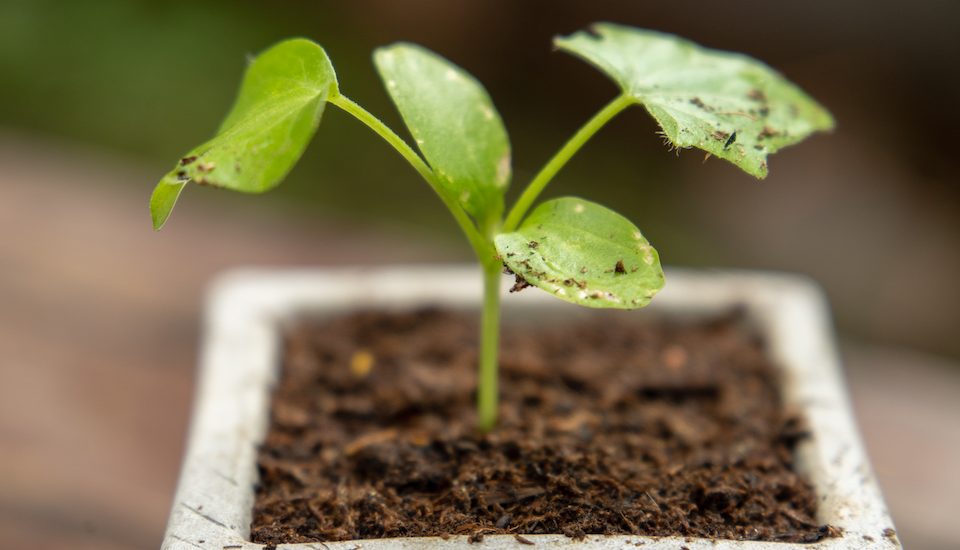